Tone Woods and Their Influence on the Sound of Acoustic Guitars

Tone Woods and Their Influence on the Sound of Acoustic Guitars

The woods used in the manufacture of guitars are called tone woods. The tone woods used in a guitar are the primary factor in that guitar’s sound, as well as their craftsmanship and value. Read on for more information on tone woods and how you will recognize what’s best for you. 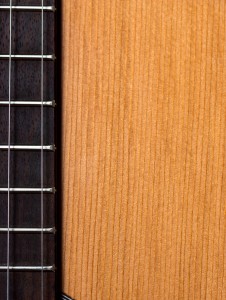 The top of the acoustic guitar’s body, the soundboard, is what vibrates from the plucking or strumming of the strings. It is the primary factor in how the guitar’s sound is shaped. Generally, a soft wood like spruce or cedar is used for the soundboard because of its high vibrational nature. In better-made and pricier guitars, a solid piece of wood is used for the soundboard. Veneer (or laminate) woods are used for less expensive models. Veneer wood is sheets of wood that are glued together to form a thicker piece. Many excellent guitars are made from veneer, but solid woods last a lot longer, are usually more durable, and gain depth and richness of sound with age. If you can afford it, solid wood is a better investment.

The Back and Sides

The back and sides (or “bottom”) of the acoustic guitar is made from hardwood that not only determines the sturdiness of the guitar but also resonates the sound made by the strings. Rosewood is typically used for higher-end models. Other great hardwoods used for less expensive models include mahogany, walnut, koa and maple. As with the soundboard of the guitar, the sturdier, more expensive models are constructed from solid wood. These have a deeper resonation than their veneer counterparts. However, many excellent guitars are made from high-quality veneer, are rugged and sound great.

The Neck and Fingerboard

As the neck needs to be extra solid for durability, mahogany is most often used. Koa and maple are also used on occasion. Because fingerboards take the most punishment of any part of the guitar, extra dense woods are necessary for their construction. Ebony is preferred, and available on high-end guitars. Rosewood is most commonly used on mid-level guitars, while softer woods are used on budget models.

The Effect of Tone Woods

Visit your local music shop to test these different combinations and find the right guitar for your sound.