The 3 Main Types of Electric Guitars

The 3 Main Types of Electric Guitars

If you’re getting more familiar with the electric guitar and the way to use them properly to make quality music, there’s quite the wide variety among the different types of them out there – and it can seem a bit too much for most people. It doesn’t have to be that way though, as the differences between the most important types of electric guitars are actually pretty simple and not so difficult to understand. When considering what electric guitar to get or to learn on, a beginner should recognize the features of the three main categories: hollow body, solid body and semi-hollow body.

Hollow bodies are an example of the earliest forms of electric guitars. The body of the instrument is similar to that of an acoustic guitar, in the sense that it consists of a chambered sound box that can produce musical tones through the use of resonance. Hollow body electric guitars are different from their acoustic counterparts in that they utilize electronic pick-ups, which convert the vibrations of the guitar’s metal strings into electronic signals. These signals can then be sent to an amplifier, where they’re converted into sound. That way, hollow body electric guitars produce their tone by combining acoustic and electric components. Gibson and Gretsch manufacture hollow body guitars that are used by various modern players. 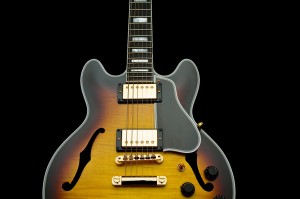 Perhaps the most easily recognizable type of electric guitar is the solid-body – as the name implies, the bodies of these guitars are made from solid wood. Some variants like the Fender Telecaster, have bodies made from a single piece of wood. In other cases – like the Gibson Les Paul – the guitar consists of a body made mainly from one type of wood, combined with a carved top made from another. The sound made by a solid body guitar comes pretty much exclusively from electric signals that the pickups convert from the strings’ vibrations. Thus, an electric amplifier is needed to transform the signals into usable sound. 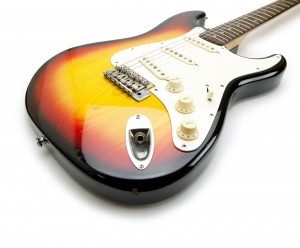 Semi-hollow body guitars combine features from both hollow and solid body models. The center of the guitar’s body is solid, while it has hollow chambers on both sides. Semi-hollow bodies resist the feedback of their hollow body counterparts, while also producing better midrange tones and versatility. That way they’re equally suited for rock and jazz alike, and prominent manufacturers include PRS and Fender.