Setting Up Your Guitar Effect Pedals

Setting Up Your Guitar Effect Pedals

The Right Pedals for Your Guitar Rack 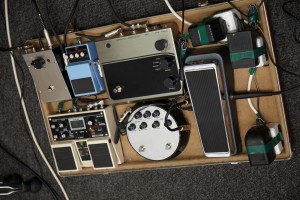 As you have advanced in your guitar or bass playing, you have most likely tried and purchased different effects pedals (also called stomp boxes) to modulate and customize your sound. It’s all well and good if you use just one each time you play, but if you want to combine several of them into a rack for maximum versatility and range, keep reading.

Because you are putting these pedals in a series, you need to be mindful of the overall effect each combination of pedals will have on your sound. And, because the tone resulting from each pedal is influenced by the one that came before it, this is not something that should just be thrown together. On the other hand, please keep in mind that these are only suggestions; some guitarists have experimented and found orders that worked better for them. Feel free to experiment!

The tuner pedal is a super way to help you tune your guitar. It is a highly accurate and easy to use pedal. If you use one of these you should put it first, because you want to tune your guitar according to the actual direct signal rather than a warped or distorted sound later down the rack.

Filter effects pedals such as wah-wah pedals and envelope filters rely on the clean signal from the guitar to work effectively. For this reason, they should be linked early in the process. Setting them in later would limit their ability to work. Of course, if you do not have the tuner pedal as listed above, go ahead and start with these types of pedals.

These kinds of pedals level out your guitar’s volume. This means it boosts the volume of quieter tones. Putting this type of pedal in at this point of the series will prevent unwanted noise and distortion.

These are the most popular types of pedals. They generate and amplify overtones, so this is where they generally should be placed in the order of pedals.

Modulation pedals such as flanger, tremolo, chorus, and phase pedals are next. This is the part where many guitarists experiment with the placement order of these pedals if they have more than one in this category. Take some time to see which order works best for you.

If you have one of these pedals, it typically makes sense to put this near the end. Since it controls only the volume of what came before it, you usually don’t want to place it earlier in the series, as it may cause unwanted diminishing of your tone.

Delay pedals can create a nice echo and/or loop effect. Because of this, it usually (though not always) makes the most sense to put this at the end of the series.

As stated above, this is the order many guitarists and bassists use. However, none of this is etched in stone. Once you have tried this basic order, feel free to experiment. Change it up until you have reached your own sonic nirvana.