Guitar Amps – Their Types and Uses

Guitar Amps – Their Types and Uses

No electric or bass guitar is complete without its amp! Not only does it register, repeat and boost what you are playing, the majority of them have several tone knobs which allow you to spread your sonic palette further than with the guitar alone.
When shopping for a guitar amp, you will notice that they come in many different sizes, shapes, styles and brands. As this will be a critical purchase for you, it is important to understand the four basic types of amplifier. This will help you purchase the one that will best suit your needs.

The Tube Amp – The Old Standby

The vacuum tube amp was the original guitar and bass amp. It may be surprising to some that although it uses “old” technology, this is still a very popular type. Its continuing popularity is not at all surprising if you actually use one. It still provides the warmest and most natural sound of the four types. It is also louder than its counterparts at the same output level. The tube amp is generally preferred by rock and blues musicians.

Generally, two types of vacuum tubes are used in the tube amp: one type for the pre-amp, one type for the power section. These tubes do occasionally need to be replaced, but are luckily inexpensive, easy to find, and simple to remove and replace. They have a long life, so this will not constitute a big expense.

Many brands use tubes for their amps, including Marshall, Fender, Mesa-Boogie, and many others. 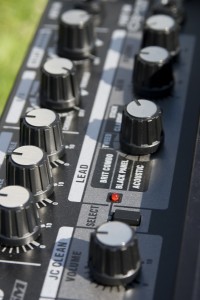 A less expensive alternative is the solid state or semiconductor amp, which uses transistors rather than tubes to modulate and amplify the sound. These are often preferred by jazz guitarists, who prefer the cleaner sound made by solid state models as opposed to the distortion and compression favored by rock, metal, and blues musicians. An additional advantage is that because they don’t use tubes that need replacing, they are lower maintenance. They are, however, much more expensive to service if they do break down, due to the necessity of having a technician diagnose and repair the unit. Solid state amps are much lighter than their tubed counterparts, which may be a consideration if you tour.

Many models, including some made by Music Man and Vox, are amps that combine the above two types. Either the pre-amp or amp is a tube, the other is a semiconductor. This allows a lighter amp to have a fuller sound.

Computerized digital amplifiers allow for an extremely wide variety of sounds and do not employ tubes at all. They have been around for just over 15 years and, like most technology, have gotten smaller and lighter each year.