Guide to Buying Your First Guitar

Guide to Buying Your First Guitar – Know What to Look For! 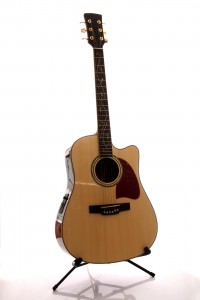 When someone is about to buy their first guitar, the most common question that arises is often “Should I get an acoustic or an electric one?” – and the answer is hardly universal. It comes down to your own preferences in most cases, and the type of music you enjoy is going to play a large role in the decision.

If you enjoy the styles of guitar music like country, pop, soft rock, folk and finger picking you should be orienting yourself towards an acoustic guitar, while on the other hand those who prefer heavier music like metal and rock would likely want an electric model. But if you don’t have such a strong preference in either direction, it’s a good idea to know what each guitar can offer you in general before making your mind up.

Buying an electric guitar can be great for a beginner (even though they’re often associated with more complex playing styles), as the guitar tends to have lower “action” which can make them easier to play, and strains the fingers of the player less. This is good enough on itself to encourage a new player towards getting an electric guitar. In addition, prices of electric guitars have gone down significantly in recent times, as the production methods kept increasing and getting cheaper for manufacturers themselves.

Then we have the acoustic guitar which is a “natural” music instrument, in the sense that it produces music directly. It can work quite well with various music styles, and it’s not difficult to learn a few chords either. You won’t need an amplifier for it, though quite a lot of new models will give you an option of using a built-in preamp and other accessories. You don’t need any electricity to play it, and you only need the guitar itself without any extra equipment – making it very portable.

In addition, the quality of the sound is directly affected by the quality of the guitar itself, meaning that a better-sounding model is going to set you back significantly more than a regular one. In general you can get a good-sounding electrical guitar for less money than a mediocre sounding acoustic one. When you throw in the cost of an amp though, things sort of even out anyway.

Your first choice is important

After you’ve played for some time, you’ll likely find yourself using both types – but choosing the appropriate one for your first purchase is important, because it will pave the path for your future development as a guitarist and will have quite the strong impact on the way you’re playing afterwards.