A Brief History of Fender Guitars

A Brief History of Fender Guitars

The Story of Fender – One of the Best Guitar Brands 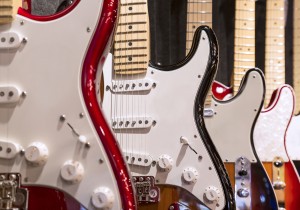 There are many well-known and respected musical instrument brands. One of the finest and best-known brands is Fender Musical Instrument Company (FMIC). Over the years, the guitar company founded by Leo Fender has produced some of the most iconic guitars and basses ever used. Here is a brief history of FMIC.

Leo Fender, an electronics technician, set up a repair shop in the late 1930s where he was often brought amplifiers in need of repair. Realizing he could produce a superior amp, he refocused his efforts on that endeavor while also developing electric and acoustic stringed instruments. In 1946, he officially launched FMIC.

As the business grew, FMIC brought new innovations in sound and design. In 1950, the company’s first well-known guitar appeared. It was a solid-bodied, Spanish style electric guitar called the Broadcaster, later renamed the Telecaster. The following year they introduced the first successful mass-produced electric bass guitar, the Precision Bass (commonly called the P-Bass). In 1954, they created the Stratocaster, which became one of the most popular and iconic guitars in the world, perhaps only second to Gibson’s Les Paul. These guitars are still being made by Fender today with only minor modifications through the times.

In 1965, Leo Fender sold his company and its brands to the Columbia Broadcasting System. (He would eventually found Music Man and then G&L Guitars.) Although CBS Musical Instruments had the deeper pockets necessary to continue to build and grow the company, they soon began to reduce the quality of the instruments and amps in an attempt to cut costs. This did not go unnoticed by musicians, who stuck to their older instruments. To this day, “Pre-CBS” Fenders are valued collector’s items.

Still, even under the ownership of CBS, Fender continued to make new innovations in design, introducing the Starcaster guitar.

In 1985, Fender employees bought the company back from CBS and began improving the quality of the instruments. They introduced new designs as well as new, exciting variations on their classic guitar lineup. They manufacture guitars in the US, Mexico, and Asia. Their instruments are still played by many of the best-known musicians in the world.